I'm looking for
product
in a size
size
. Show me the
colour
items.
Super Search

To be an effective leader of innovation in an organization requires very large doses of patience and persistence. While we all like to hear about great innovators and their success stories, the reality is that the vast majority of innovation initiatives fail– some say up to 95%. Here’s a warning. If you’ve been tasked with innovation in your organization, the odds are very stacked against you trying to shift the status quo. You’re going to get very very frustrated by organizational resistance to change.

One key reason for failure is that many innovation initiatives start out examining a narrowly-defined issue that when they are looked at more closely reveal a bigger systemic problem that needs to be resolved first. And the bigger that problem is, the more resistance to change you are going to encounter.

Every organization has silos, politics and turf wars competing for resources and budget. There are a lot of people who ready to say “no” to your better idea. This is where good leadership is so important. Good leaders have to make the tough decisions where to put an organization’s emphasis. James March of Stanford University calls this an organizational inherent tension between two states of either “exploitation” or “exploration”. Exploitation includes things like “reﬁnement, choice, production, efﬁciency, selection, implementation, execution.” Exploration includes things like “search, variation, risk taking, experimentation, play, ﬂexibility, discovery, innovation”. Exploitation typically provides short-term, immediate, certain beneﬁts. Exploration is longer-term, risky and uncertain. Guess which one most organizations gravitate to? Resistance to change is both part of the nature of people and and organizations (since they’re made up of people) but at the same time adaptation and evolution is absolutely necessary for survival in the marketplace of ideas and business.

“It must be remembered that there is nothing more difficult to plan, more doubtful of success, nor more dangerous to management than the creation of a new system. For the initiator has the enmity of all who would profit by the preservation of the old institution and merely the lukewarm defense in those who gain by the new ones.” 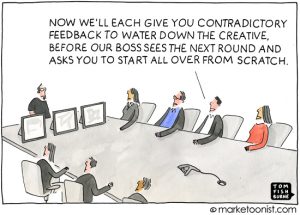 Likewise, Clayton Christensen frequently speaks of the Innovator’s Dilemma where he argues that successful companies put too much emphasis on customers’ current needs, and fail to adopt new technology or business models that meet their customers or clients unstated or future needs. He argues that such companies will eventually fall behind, if not fail.

The bottom line is that if you’re tasked with innovation in your organization, you’ll need a lot of patience and persistence. You’ll also need a leader who knows both how to strike the right balance between exploitation and exploration and to defend you against those who want to put a stop to the dangerous changes (to them) you’re trying to make.